My desk is a 48”x24” Herman Miller Everywhere Rectangular Table. I wish I had gone with the white finish and legs for the table.

A giant AUKEY mouse pad covers the top, granting unlimited mouse travel, and it’s much nicer to have a soft surface than to place my wrists on the bare desktop.

I sit on a comfy padded dining chair and I have no issue with it. The chair looks better than an office chair since my setup is in the living room.

I have a nice Poppin file cabinet that doubles as a second seat.

My old Mac Pro 5,1 serves as a foot rest at the moment.

My primary computer is the Intel NUC 7i5BNH.


The NUC is outfitted with:

For peripherals, I have

Everything plugs in to a Belkin 8-Outlet surge protector. The plug shapes are annoying and block one of the 8 outlets. Wish I had some 3 inch extension cords.

I’m an Android user. I broke my last phone, the amazing LG V30, and now I use a cheap Amazon Moto X4. It’s super nice to go midrange over flagship. I will keep it as long as the GPS can reliably get me from point A to B.

My particular favorite apps are:

I use Bose SoundSport Wireless Headphones. I haven’t gone full wireless because I like having the neck wire to hang them from when I’m not wearing them.

My dotfiles, vimrc, zshrc, and Chrome extensions of choice are in GitHub if that’s what you’re into.

CLI tools I use include:

My terminal emulator is Konsole now that I use KDE. Konsole is non-electron, supports splitting without tmux, 24-bit color, customizable shortcuts and scrollback. It checks all the boxes for me. Terminator and Termite are my other terminal choices. I am not using them because they are libvte-based and I wanted to stay in the KDE world.

I’ve distro-hopped from Mojave to Manjaro Linux since switching from a Mac Pro to the NUC. I went with the KDE version because Plasma hooked me. Manjaro has the benefits of Arch Linux (IMO, primarily pacman and the AUR) without having to do the setup for the millionth time.

I still use Neovim having moved from Vim years ago. I follow HEAD since I prudent enough read the Gitter room and changelogs.

I made my own color scheme called ”meh.” It caters to what I consider important when looking at code.

My programming font of choice is Mozilla’s Fira Mono. 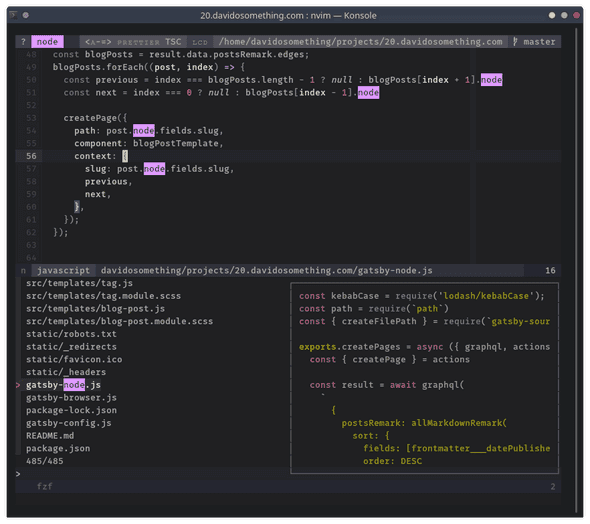 For note-taking, I converted to Joplin Notes last year. Joplin is cross-platform including mobile apps; it has markdown support, tagging, and end-to-end encrypted syncing. The desktop UI is a bit drab, but customizable via CSS.

My password manager is Bitwarden, and I pay for Premium. I moved from KeepassXC to make sharing some passwords easier with my family.

I wouldn’t be at a loss if I had re-provision with the same settings and restore my files.

For file syncing and sharing I use Dropbox and Google Drive (e.g. my resume, avatars, etc.). I always assume that things in those cloud services can go public at any time. For super private stuff, I have a Synology NAS I can access.

My cloud files and local photos and documents are synced to my NAS. I send encrypted, incremental snapshots of the synced drive to Backblaze B2 using restic running in a Docker container.

A few of my GitHub and GitLab repos are mirrored to a local Dockerized Gitea server in case either of those services go down or missing. Watchtower keeps my Docker containers up-to-date automatically.

On the OS-level, I keep my /etc backed up using etckeeper, and push to a remote git repo as backup.